In the 1890s Camden Park dramatically expanded its dairy production and built a network of creameries to extract cream from milk using the recently invented mechanical separators. Camden Park's increased dairy production in the 1890s was part of the industry-wide expansion, but the estate well and truly outpaced industry trends through its innovative use of share-farmers and a ten-fold increase in the size of its herd.

The process of revitalising Camden Park's dairy production began in 1887 when Elizabeth Onslow (Macarthur Onslow from 1892) took her children to Europe for their education. During her two-year absence she studied dairying in southern England and the system of share-farming in Italy. In 1892 Elizabeth Macarthur Onslow drew on her overseas experience to reorganise dairy production on Camden Park. Previously Camden Park's dairy herd was operated by farm employees. Now the estate was to run multiple dairy herds, each operated by a share-farmer who had a direct stake in its performance. It was a sharing of profits and responsibility, with share-farmers generally receiving half the income from the milk produced and half the income from sale of pigs raised on skim milk.

All we want is a family man with a good knowledge of practical farming. We find house, farm, cows and horses, tools ... We supply each farmer on an average with about sixty cows in full milk. All dry stock are kept by ourselves, and as the cows come in they are apportioned to the various farms. Of course considerable oversight is needed, but our people see that the whole arrangement is a mutual one, and the results are fairly divided.

By June 1899 there were 20 share-farmers milking 959 cows while overall the dairy herd totalled 2,205 head including heifers and dry cows. The number of dairy share-farmers peaked at 20 and by December 1899 it was back to 17.

Extra land was cleared to provide more grazing areas for the increased number of stock.By 1900, in addition to the 17 or so share-farms there were 40 farms on the estate that were leased by tenants who operated them independently and simply paid rent.

Share-farming allowed people to enter the industry without the need to save for a deposit on land. In practice dairying 'on the shares' required not only the labour of the share-farmer, but also that of his wife and children. The more children the better, particularly older children, who could milk and help around the farm before and after school. 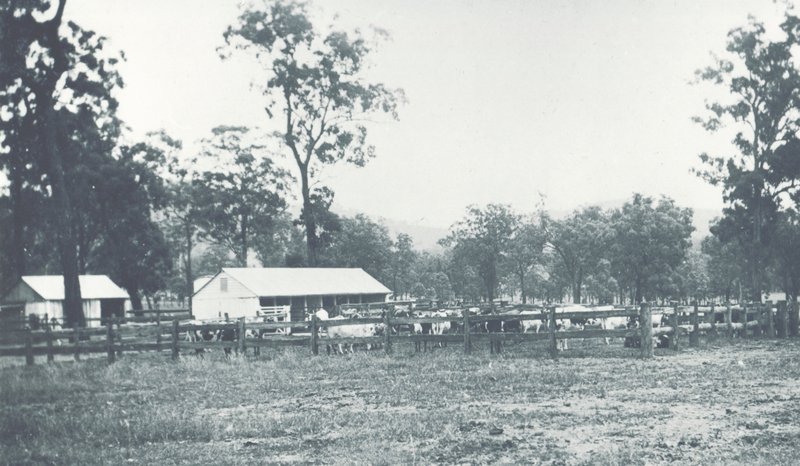 Milking shed, dairy cows and yards on Sharpe's share-farm at Cawdor. John Sharpe was one of the early share-farmers on Camden Park. (Camden Historical Society).