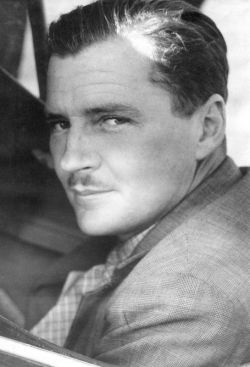 Edward Macarthur Onslow was born at Goulburn in 1909, a direct descendant of John and Elizabeth Macarthur. He attended The Kings School in Sydney and then joined the Royal NSW Lancers. As Captain he trained the mounted troops on the family property, Macquarie Grove.

As Assistant Manager of Camden Park Estate in the 1930s Edward was responsible for initiatives such as construction of the Camden Vale Inn and the Belgenny Community Hall.

Edward became a pilot and started a flying school at Camden in 1937. He established a private aerodrome there in 1938 which he sold to the Government during World War II and it became the Central Flying School.

Despite his interest in flying, Edward enlisted in the Australian army in World War II and attained the rank of Lieutenant Colonel. He served in North Africa and New Guinea, winning the Distinguished Service Order (DSO) in 1944.

After the war Edward became Managing Director of Camden Park Estate and focused on reorganisation of its dairying enterprise. During an overseas study tour he visited a rotolactor in America and returned to build one at Menangle. When completed in 1952 the rotolactor was the first in Australia and only the third of its kind in the world.

Edward's decision to build Australia's first rotary dairy was far-sighted and the rotolactor was decades ahead of its time,  the forerunner of rotary dairies and 21st century robotic dairies that use a rotary milking platform.

Edward Macarthur Onslow contributed significantly to the local Camden community and was president of many local organisations in the district. He died in 1980.