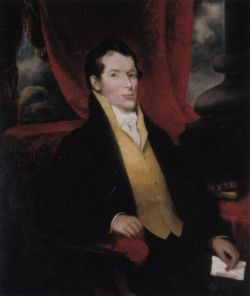 John Macarthur (1767?-1834), was baptized on 3 September 1767 at Stoke Damerel, near Plymouth, England, one of three known children of two expatriate Scots, Alexander Macarthur (formerly of Argyllshire) and his wife Catherine (d.1777), who lived in the parish of St Andrew in Devonport.

In 1789 John was appointed Lieutenant in the newly-formed NSW Corps – later dubbed the 'Rum Corps'. He arrived in Sydney in 1790 with his wife Elizabeth and their son Edward; he was appointed paymaster to the NSW Corps in 1792 and inspector of public works the following year. In 1793 John was granted land near Parramatta that he named 'Elizabeth Farm' in honour of his wife.

Macarthur's situation unravelled in September 1801 when he shot and seriously wounded his commanding officer, Lieutenant-Colonel William Paterson, in a duel. At first it looked as though Paterson might die from his wounds, but he recovered. Macarthur was sent to England for court martial and arrived there in late 1802. The court martial lapsed, however, when the papers for it were lost.

Although he arrived in England under a cloud, it was an opportune time and John Macarthur made the most of it. The British government was more than a little interested in this 'colonial' who had started a fledgling wool enterprise at Elizabeth Farm and was one of the few breeders of pure merinos in New South Wales.

Family ties also worked in Macarthur's favour. With his nephew's help, John Macarthur convinced the British Government he could establish a fine wool industry in New South Wales. In October 1804 Lord Camden directed Governor King to grant John Macarthur 5,000 acres of land 'situated near Mount Taurus' in the Cowpastures, with the promise of a further 5,000 acres if the wool venture succeeded. Macarthur returned to Sydney in 1805 with orders for a grant of part of the best pasture land in the colony.

Macarthur named his grant 'Camden', and later it was changed to 'Camden Park' to avoid confusion with the new village of Camden which was laid out in 1841.

John Macarthur died at Home Farm (now Belgenny Farm) at Camden in 1834, by which time the spotlight no longer shone on the Macarthur Merinos. Macarthur's sons James and William now managed Camden, but wool growing was moving west of the ranges and Saxon merinos had become prominent in place of Macarthur's Spanish merinos.

Macarthur's death in 1834 marked the sunset of the family's fame in wool production. The baton passed to the next generation of Macarthurs who brought dairying out of the shadow of sheep and wool.