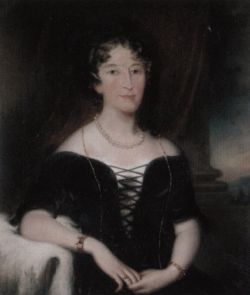 Born Elizabeth Veale in 1766 in Devon, England, she married John Macarthur in 1788. Elizabeth weathered the political storms that raged around her husband for most of his life. They had nine children, seven of whom survived past infancy, three girls (Elizabeth, Mary, Emmeline) and four boys (Edward, John, James, William).

At their home, Elizabeth Farm at Rosehill, Elizabeth created a calm family life away from her husband's political spotlight. During John's absence in England from 1809 to 1817, she managed their farms at Rosehill, Seven Hills and Camden with their nephew Hannibal Macarthur. Elizabeth played a pivotal role in developing the Camden estate as a Merino stud and wool export enterprise.

Elizabeth had great faith in the colony and escaped the criticism often levelled at her husband. She managed the family estates with energy and a zest for outdoor activity which required travel from property to property. Elizabeth conducted herself with grace and dignity, forming close long-term friendships with several high ranking colonial women including Anna King (wife of Governor King) and Elizabeth Paterson (wife of Lieutenant-Governor Paterson).